Like a lot of those who write fiction, I am horrible at poetry. I enjoy it sometimes, though I have no patience for deciphering or working in formal verse. What use I find in writing poetry is mainly from forcing oneself to generate imagery and stitch together phrases, some of which could be useful later in the making of a story. What follows is the work of those who are good at poetry, and one of those exercises. The spacing on the last is somewhat off, as WordPress’ spacing decisions confound me, but as it’s essentially mulch anyway, it’s not terribly important.

All month I heard the owls

In our hands we hold the shadow of our hands.

The night is kind – the others do not see us holding our shadow.

We reinforce the night. We watch ourselves.

So we think better of others.

The sea still seeks our eyes and we are not there.

A young girl buttons up her love in her breast

and we look away smiling at the great distance.

Perhaps high up, in the starlight, a skylight opens up

that looks out on the sea, the olive trees and the burnt houses –

We listen to the butterfly gyrating in the glass of All Soul’s Day,

and the fishermen’s daughter grinding serenity in her coffee 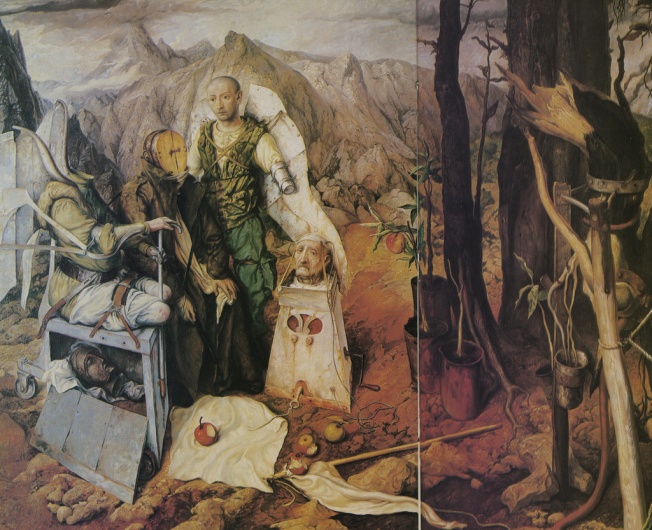 Even the Syro-Chaldean bishopric I offered
on the strength of Hadrian VII
did not tempt Corvo. As mere Provost
to the Lieutenant of Grandmagistracy
of Sanctissima Sophia he fled
to Venice, convinced the Rhodes Trustees
were plotting his assassination.
Where else should provide a home
to the inventor of submarine photography?
I missed his inch-thick cigarettes,
gigantic Waterman fountain pens
and Graecocorvine vocabulary.
We played duets but kissed only once.
At last he denounced me as a fraud
and schismatic. I said he played the spinet
like a lobster trying to escape its pot –
after that, my overtures were useless.
For all his violence and absurdity
I warm to think of him now,
his cropped grey hair dyed with henna,
his white hand, wearing the spur-rowel ring
I gave him as defence against Jesuits,
closed round the oar of his panther-skinned gondola
diapered with crabs and ravens and flying
St George and the red-and-gold Vesilla
of the Bucintoro Rowing Club.
I think less of the lagoon-eyed fauns
he photographs and masturbates.
Does he think of me in Godless Middlesex,
where it either rains or they’re playing cricket?
The Syro-Chaldean Church is not doing well
despite my sigils, blazons, banners
and the undeniable splendour of our ritual.
The landlord’s wife is singing Auld Lang Syne.
This is going to be a Godless century. – Ian Duhig, “Archbishop Mar Jacobus Remembers the Baron.”

Dripping with sleep I went to write a poem
And the waters of the world took me for their own. – Charles Henri Ford, from “Epigrams.”

Gennady Spirin, Minstrel Gazing up at the Moon.

You were youthful and callow, ripe with greed.

You were a ghost catching pluck birds in the air.

the meadows caught in camera’s nets.

thin as mountain air and fat as honey,

your slingshot of song

burst every ear drum in the valley,

pried open the dry rot in homes like ribs.

You collected an encyclopedia of eyes,

a rolodex of lips,

and a paucity of self awareness.

Callow and youthful, slingshot of dares,

Proudly displayed, among other wares.

You carried a bucket,

filled with the limp body of a muck owl,

all the way up the hill.

You uncracked its wings,

and set it out, cooling,

When the dark came, and dragging

the moon with it behind,

and left nothing but a rind.

Your laugh was wide and grasping,

and we set it out to catch the rain.  – Baron Earwig, “Doggerel for Callow Youth.”

2 thoughts on “the place where dead leaves go…”