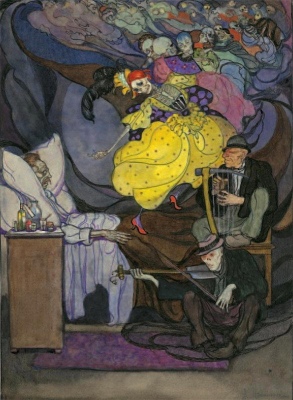 I’ve just finished reading Dark Renaissance’s The Sea of Blood, their recent collection of Reggie Oliver’s best fiction thus far. Having never read his fiction at all, nor his plays, I was unsure what to expect. I had been led to believe that he was some sort of melding of M.R. James with Robert Aickman, and knew he was one of the biggest names in the contemporary supernatural field, but that’s about it. This collection is a reminder of my own reading temperament, in that I am not suited to exclusive literary monogamy, but prefer to drift around having passionate affairs with short and long works by different authors. In this sense the anthology form is perfect for me, being a sort of literary version of a polyamorous commune. Whereas choosing to read the collected stories of a particular author in one block is like moving in with someone. You get to see hidden virtues, yes, but mostly you see that they leave their dirty socks on the kitchen table, forget to close the fridge door, and repeat their funny jokes excessively. The obsessions and limitations come out amidst the strengths.

Oliver’s obsessions are not especially subtle. In terms of his characters, everyone is or was in the theater, or knows someone who is on the stage. All of the plays performed are middling thrillers or mysteries, likely also featuring middle class characters even more wound up, sucked in, repressed, and complacently unfeeling. People are going on seaside vacations. Reminiscing about private schools, the names Oxford and Eton hang off their lifeless faces like the green tongues of the hanged, memories of authoritarian masters bulge out like asphyxiate’s eyes. They abashedly admit to being snobs about wine, classical music, or class. Almost all of them have contacts with the upper class, although they do not belong themselves. LGBTQ characters pop in out and out of narratives, and sometimes do the narrating themselves – a pleasant trait I am unused to in supernatural fiction because I seldom read contemporary work. And yet, Oliver knows it well, but this relentlessly British middle class mileau becomes repetitive and deadening after a dozen or so tales.

Of the twenty plus tales that feature in The Sea of Blood, the jewel for me was “Flowers of the Sea.” An aging writer and his painter wife begin to have shared blackout fugues or seizures, the aftereffect of which leaves them numbed and incapable of aesthetic feeling. Only the writer ever remembers that the seizures happen, and it soon comes out that the painter is suffering from dementia. They telepathically share her nightmares, which consist of visions of falling towards an infinite miasmic sea. The horrific imagery is clearly and rigorously molded to the story’s theme of dementia. In other tales, such as “The Constant Rake,” the supernatural is a kind of expensively imported substance that isn’t quite what it purports to be on arrival; or more accurately, a species of exotic pet loosed into the natural wild of the fiction, where it destroys and subverts the local ecosystem.

In “Flowers,” the mental decay of dementia is identified with physical decay and made ally to the decay of vegetable matter, the disintegration of flora and fauna, their breaking down into liquid form, culminating in a liquid sea of mouths and hair, beings half cabbage and half animal. The sea, filled with its death flowers, is the anti-narrative force of chaos. It is autophagic, and as insensate as its victims ultimately become; it eats and excretes itself and composts identity and memory into an annihilating humus used only to cultivate more death. There is no resolution or reprieve from suffering. The ending discovery of a Victorian book of pressed flowers, altered by his wife to represent the “death land” she had entered, is surprising and genuinely earned. Even a minor character, the conniving Greek Stavros, is memorable. His pitiless hunger for the accumulation of valuable antique matter is a sort of structural rhyme for dementia’s hunger for identity, death’s thirst for biological matter.

There are a number of similarities to an Aleister Crowley tale, “The Testament of Magdalen Blair,” from the deceased partner, telepathic communication, and the image of falling towards a slimy and grayly putrescent ocean. In both, everything ends in pain and without any hope. The biographical connections to Oliver’s marriage and his wife’s death (she was a painter as well as an actress) perhaps go in some small way towards explaining the perfection and unity of the tale, a perfection and unity not really fully realized in any of his others, however excellent they are. The portrait of the painterly wife whose mind is slipping away may be a composite portrait, but the grief and the experience with dementia appear real. In “Flowers,” the Jamesian device of found imaginary manuscripts reappears in truly sinister and harrowing form, without any of the playfulness of previous manifestations. The story does not have its tongue in its cheek, and without this encumbrance, its sharp incisors and canines can be seen plainly. 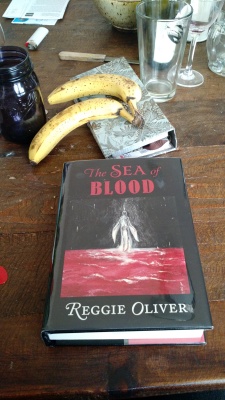 On the second order of quality, “The Old Silence,” “Minos or Rhadamanthus,” and “The Dreams of Cardinal Vittorini” stand out. These three all represent particular strains of Oliver’s fiction. “Cardinal Vittorini” is the James/Borges side, crammed with antique documents, forgotten historical figures, and uninteresting academics who ultimately burn the documents they find. Only a few of M.R. James’ tales hit me (“Casting the Runes,” “Cathedral History,” a few others) and most Jamesian fiction leaves me cold as pudding. But Oliver makes the pleasing terror more cosmic in style, marking it out for me as a more nihilistic cousin to Roger Johnson’s wonderful “The Wall Painting.” A Death-God sitting on his throne of nothing? You have my attention.

“Minos” is Oliver in trad-supernatural mode. Two ghosts meet each other on a cricket playing-field outside a boy’s prep school; one a former student, the other headmaster. The revelation of school authority figures having sexual peculiarities or fetishes is recurrent in Oliver’s work, with here a less dark figuration of it than in “The Rooms are High,” with its disturbing coffeehouse conversation with an openly predatory pedophile of a headmaster. In “Minos” the peculiarity is more an inordinate appreciation of caning young boys. It is also a period piece, set just after the first world war. Its plot line is old hat, and not really intended to be anything else. The focus is on an emotional confrontation and a heavily congealed mood of melancholy. Taken on its own terms, it is a lovely tale.

“The Old Silence” I’ve graded as the second best story in Sea of Blood, and it stands in for Oliver’s weirder tendencies. The term “weird” appears to have unbuckled itself from its definitional seat belt, and is happily bouncing around on a number of seats as if it owns all of them. This reservation in mind, “Silence” is the closest Oliver gets to straight ahead weird fiction, and it is really something. A hack of a psychic medium who has a thing for silent films gets his comeuppance in a grisly manner. There are a number of fantastic stories that deal with the ectoplasms of mediums, but none of them are as gruesome as this. In a way it reminds me of the work of Junji Ito: I highly recommend all of the aforementioned tales. Oliver is a fine and fairly traditional stylist within the supernatural tradition. Outside of “Flowers of the Sea,” nothing in this collection is exactly scintillating, but a solid few are powerful entertainments, and his prose and characterization are always highly readable.

Also, here is Oliver with a bit part in the 1990 adaptation of Kingsley Amis’s “The Green Man.”