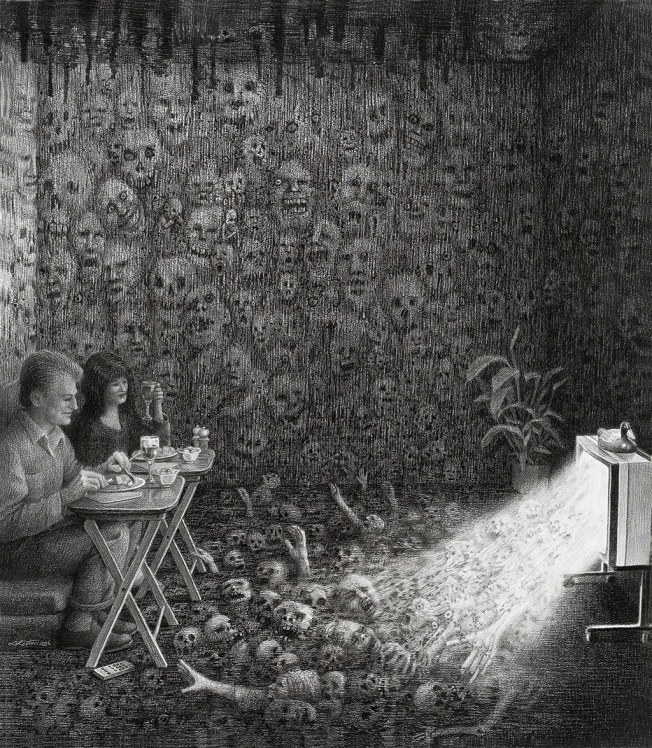 Our father is a nation.

In the song “Nations” by avant-garde group Angels of Light there is a conception of the state which hews closer to the forms and conventions of horror than many songs coming out of the traditions of punk, or that weird sibling of punk and metal, grind. In punk songs, the state tends to be broadly drawn or even personified in caricature, like a Tammany Hall figure from Thomas Nast cartoons. Perhaps simplified and exaggerated, but perfectly explicable. In grind songs, the state (whether the American state, the British state, etc..) is specified, outlined with clinical precision, anatomized, called to attention for its myriad failings. It is sinister, but again, explicable. If the former is concerned with figureheads, the latter is concerned with systems.

But in “Nations,” the state is a more formless entity, whose expansionist aims may be clear, but whose methods and means and manifestations are not. The nation is electricity; the nation drinks blood and sand; the nation hides beneath the skin of children. It is any nations, and all nations. It is contradictory and prone to mutation, to metastasize. Most importantly, it is an entity with a life of its own.

The song even touches on cultural imperialism and propaganda, with the following:

And he feeds the mind of nations.

The “mind” of nations. Here is nationhood, the state, as a strange kind of collective being, like a polyp-clustered colony organism growing from the stagnant water in someone’s basement. Or, perhaps more accurately, from an information-harvesting bunker in Nebraska. Later, it references the “scream of nations,” as if all nations were congenitally attached and responded to stimuli in unison, a Siamese apparatus of power conjoined at the level of technology. Rather than being simply silly and contradictory, this suggests an idea of nations as some kind of virus infecting humanity, attaching itself to us in various forms and guises and ostensibly serving our needs, but in reality seeking out its own ends. However, tied up with this idea, of course, is the more basic one of the population as a willing vessel for propaganda and PR whitewashes. They are part of this collective being, too, and watch serialized reenactments of the organism’s growth at evenings.

Not politically enlightening, and in fact purposely confused and murky, but compelling in its own right as a hallucinatory piece of fiction presenting a terrifying and fragmented vision of the modern state – and a vision much less mundane, but also little less threatening, I would add.